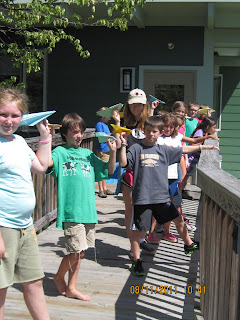 What has two legs, is full of energy and really, really loves birds? If you guessed a camper at VINS Raptor Camp then you guessed correctly!

The last two weeks of raptor camp were bursting with excitement as kids grades 4-6 explored the world of raptors right here at VINS in Quechee. Campers had some special opportunities to go behind the scenes in Wildlife Services (our avian rehabilitation department) watch bird programs, and help staff with daily raptor feedings. Each day presented an up-close-and-personal encounter with a bird, and campers were learning without even knowing it.

As campers explored the different adaptations birds use to survive, they had to recreate those adaptations, dressing up one of their group members and explaining why those adaptations were important to that individual bird. Now when it came to owl pellets, the fur and bone a raptor coughs up the after eating their prey, we not only dissected some, we ate some! Not to worry: we created owl pellets with the help of some oats, chocolate and sugar.

As our week progressed, the campers saved the day by helping the staff locate one of our lost birds (a stuffed, fake bird, of course) by learning how to use telemetry and how biologists and researchers use this tool to track not only raptors, but other animals as well. Friday turned out to be the busiest day for raptor camp. Campers learned how to hold our education eastern screech owl; they were again greeted by a guest speaker from the National Park Service, but the last Friday of camp was also significant for many reasons. Campers had been learning about how injured birds came into Wildlife Services, were cared for, and were then released back into their natural habitat. They learned how the action of one person can make the difference for one bird.

On Friday Aug. 19, four of VINS camps, along with members of the public, had the opportunity to see two juvenile broad-winged hawks released back into the wild. What a wonderful way to end an exciting week! A special thank you to Sam, KB, and VINS staff for all of their hard work and support. See you next year!