This Is How It’s Done 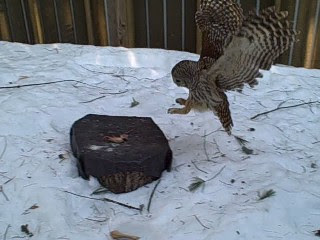 With so many barred owls in critical condition here in Wildlife Services, it is especially rewarding when one is ready to be released into the wild. One such owl was released at a local school last week after spending almost three months in our care!

Watch a video of this owl’s silent flight here.

This particular barred owl stood out among our patients. With a shattered bone in his wing and severe head trauma, his prognosis was not good. Yet after keeping his wing stabilized for several weeks, it healed and the owl was ready to fly again. We put him in our large flight cage and to our delight, he flew like a dream! Not only did he get good lift and distance, but he was agile, able to effortlessly switch direction mid-flight. Furthermore, he was a good eater, making him an exemplary patient. Every afternoon around 3:30 we went out and put food on his feeding stump. He wasn’t shy; before we turned to leave, he swooped down and snatched the food without hesitation! 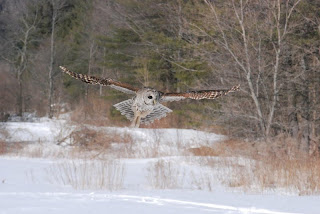 In the video of this owl at feeding time, this owl demonstrates his excellent flying skills as well as an adaptation most owls have: silent flight. Its soft, broad wings and fringed feathers allow it to fly without making a sound. Silent flight allows owls to not only hunt without being heard, but to continue listening for prey as they are flying. Pay attention, all you barred owls: this, ladies and gentlemen, is how it’s done.

The bottom photo, courtesy of Jeff Mornis, was taken at this owl’s release.