Luck Be a MODO Tonight 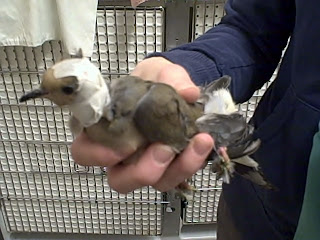 This mourning dove is one lucky guy. Based on the nature of his injuries, we suspect he was attacked by a cooper’s hawk or similar bird, but managed to escape.

See a video of this dove’s treatment.

The mourning dove (or “MODO,” as abbreviated in the bird world) was found hiding out in a garage, likely trying to recover from the attack, and was brought in by the people who found him. (As a side note, if you ever see a wild animal attacking another wild animal, we never recommend breaking it up to try to “save” one of the animals. All animals need to eat and defend their territory; it’s nature!)

Upon exam, we found the dove to have serious wounds to his right wing, and a large tear in the flesh on his head that exposed his skull. The tear on the scalp is quite large, and we have plans to stitch it up once the bird is a bit more stable. As you will see in our video, he was too weak to sustain anesthesia, so we will have to wait a few more days to put him under and get to stitching. The dove is also very thin, and has mild frostbite on several of his toes, which we are currently treating.

So for now, this little MODO needs some rest, food and a bit of luck to survive his serious injuries.