February 3, 2017
By Lauren Adams
Lead Wildlife Keeper
Around the rehab center at VINS, winter brings few surprises. Lots of Barred Owls, maybe a few Red-tailed or a Cooper’s Hawks, a scattering of Mourning and Rock Doves, the odd winter songbird. Those are the usuals. So you can imagine our surprise when a very lovely, but very sad Great Egret came through the doors a few weeks ago in mid-December. 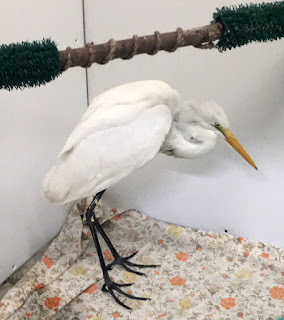 If you’ve never seen this type of bird, that is because they are extremely uncommon in Vermont. Individuals are spotted on rare occasions during the warmer months along rivers, lakes and other wetlands, and they may pass through on a migration route from breeding grounds in the central US to the coast, but they do not typically breed in Vermont or most of inland New England. They also prefer to spend the winters in places much warmer than here, migrating to Mexico, Central and South America. Certainly, just spotting a Great Egret in the middle of Vermont in the middle of December is the first indication that something is not right.

I am so pleased to share this bird’s story because of its uniqueness, but also because it is a wonderful illustration of the kindness of people. I sometimes say, “It takes a village to help a bird,” and this case exemplifies that concept.
On typical winter day, cold in the air, snow on the ground, December 17, 2016, some folks in Hardwick, VT came upon some unexpected wildlife. Noticing a large white bird, huddled on the ground, trying to hide in some snow and under a car, they recognized the oddness of the situation and chose to help. They did the right thing by contacting their local Fish and Wildlife Game Warden, and not attempting a rescue themselves. These birds, when healthy, can be very dangerous. We got the call at our rehab center that morning from the officer that he had the bird and was on his way.
The egret came into us weak, dehydrated, starving and cold, symptoms I would expect of a bird that should be sunning in Florida right now, but somehow got stuck and grounded during migration. Any longer in the wild, this bird surely would have gotten frostbite, feather damage, and likely starved or frozen to death. But it was his lucky day.
We started him on our typical ‘critical care’ program, or as I like to say it, the TLC treatment plan. He was put on heavy duty fluid therapy, heat support and nutritional support, anti-parasitic and pain medications, and vitamin supplementation. We had to balance the right amount of treatment to gently build up his strength with handling as little as possible due to the high-stress personality of these birds. After a few days, his attitude perked up quite a bit, and he began standing and perching on a branch, a great sign. 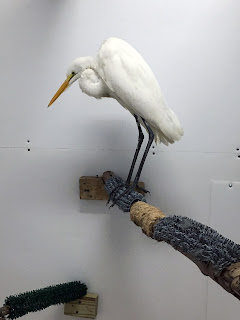 As the days went by, the improving condition of the bird was encouraging, but also had me worrying about the next step. What are we going to do with this bird, once it is healthy? We can’t release him here in the dead of winter, and unfortunately, we don’t have the space or proper set-up to keep him until springtime brings more hospitable weather. Am I going to need to fly this bird down to Florida?

With those thoughts in mind, we continued our rehab. By the new year, the bird wasn’t quite ready to go yet, but was getting close. The main challenge we had to overcome was getting him to self-feed. Up until this time, we had been force feeding him twice every day. I bought so much frozen smelt at the local grocery store that at one point I felt compelled to qualify my purchase to the quizzical look on the cashier’s face, saying “They’re not for me, they’re for a bird.” Although the bird’s strength was greatly improved, and we were able to discontinue all other treatment, he showed no interest in the delicious smelt we left for him each day and each night.
Finally, I went to the pet store to by the live ‘feeder fish’ that folks use to feed their larger fish and reptiles. I bought a dozen little fish called Comets, and left him a handful of those with his smelt that afternoon. He hadn’t eaten by the time I left work at the end of the day, and I skipped his afternoon force-feed to make him good and hungry. It was with measured hope that I came in and did my morning peek into his enclosure to see if he’d eaten, and I nearly cried with happiness. He ate! Everything was gone, all five live fish and the ten or so smelt that had been left. We immediately discontinued the force-feeds and kept his dish replenished with fish throughout the remaining days in rehab. From that day on, he continued to eat consistently, and we were able to completely ease off of treatment, only handling him at his weekly weight-checks.
That obstacle out of the way, the question of release or transport that had been in the back of my mind raced to the front. It’s odd to think about packing a bird into an airplane to fly it down south. Thankfully, we were able to avoid that. After several phone calls and emails, I was able to secure our bird a spot at a rehab center dedicated to the care of herons, egrets and bitterns only, a place where they had proper aviaries, freezers full of fish, and the resources and know-how to keep this guy over the winter until he could be released. And it was only 7 ½ hours away. 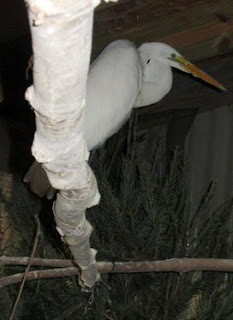 You’ll find in the field of wildlife rehabilitation no shortage of kindness and generosity. People regularly go to great lengths, far out of their way, with no expectation of receiving anything in return, to help out an animal in need. One of our amazing volunteers here at VINS didn’t even hesitate before she offered to make the trip. From the people who first found this egret, to the game warden that drove him almost two hours, to the rehabber to offered to take him on for the winter, this guy had a lot of folks in his corner. I was, and am, so touched by the compassion shown by these people, and that I am lucky enough to see every day.

The egret was good and strong, having gained over 200 grams, about a fifth of his total body weight, in care, when we boxed him up for transport on Wednesday, January 11th. After a total of 26 days in our rehab center, this bird had a lot of people rooting for him. I am thrilled to report that the trip was a success, and he is now in good hands. We expect his release and return to the wild, strong and healthy, sometime this spring.
Thank you to everyone who cared about this bird. I know I won’t ever forget this one.