How to Rehabilitate – Lesson 1 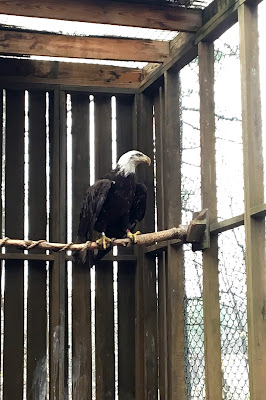 Ever wonder how we get the birds we rehabilitate back to flight ready status? Well the answer might surprise you, maybe you have even experienced it yourself. We put them through physical therapy! That’s right, we work their muscles for them! Now you are probably wondering how you work a bird’s muscles. We can’t ask them to extend their wing or to stretch their leg out. In order to get them back to flying condition we have to be innovative and crafty.

Picture a bird that got hit by a car. They come in to our rehab facility with a fractured right humerus. Radiographs show that the break is clean and the ends are perfectly lined up. We put the bird in a wing wrap and start them on an anti-inflammatory/pain medicine. After their wing has healed and they are done with medications, we start them on their first part of physical therapy. That includes grabbing the bird, and stretching the post-injured wing several times a day. The point of this is to create some flexibility in the wing as it starts to heal and, hopefully, prevent tough scar tissue from growing. After this is done we then move them outside to a flight enclosure.

Now, I want you to remember that this bird has been in a small enclosure for about 2-3 weeks to limit their wing movement in order to promote correct bone healing. They haven’t been able to exercise their pectoral or breast muscles (flight muscles), which account for 15-25% of their body weight, and are the main muscles that control their flight. During that 2-3 week process they go through a small amount of muscle atrophy, which is to be expected. Imagine that you laid in bed for 2-3 weeks, without getting up once, your legs would lose some amount of muscle and wouldn’t be as strong as they were. That is where physical therapy comes in handy.

When we place them outside we need to build on their flight muscles again. When a bird is left alone outside by itself, they will more than likely just sit in one spot and not move. That obviously won’t build any muscle. It is our job to go in the enclosure with them and convince them to fly. Whether that is just walking close to them, or standing behind them and clapping. We use the bird’s healthy fear of humans to encourage them to exercise and re-build their flight muscles. We keep track of flights completed and make sure that number steadily goes up. Once they complete a pre-determined number (species dependent) of completed flights and don’t show they are tired, they are ready to once again be part of the wildlife you see every day!