This summer, VINS was fortunate to welcome a whopping four new birds to the education team. We are excited to introduce you to them, and look forward to your meeting them eye-to-eye as raptor ambassadors! 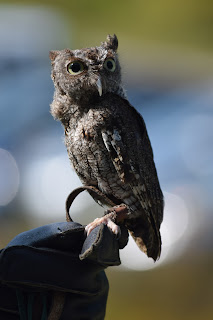 When next you come to VINS, keep your eyes peeled for our tiniest educator yet! Miami arrived this summer all the way from Florida, where his nest tree was cut down by a logger and he arrived at a rehabilitation center blind in one eye. He is a “gray morph” Eastern Screech Owl, the same species as our “red morph” Screeches on exhibit, Virginia and Kentucky, just a radically different color. All the same, Miami is a tiny treasure, already getting quite used to the gigantic humans that move about his space and blinking at them incredulously. 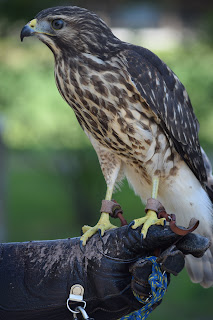 The Red-shouldered Hawk is a species of Special Concern in New York state, meaning their population has been in decline but not so drastically as to warrant an Endangered status. But, as naturalist Rosalie Edge put it, “The time to protect a species is while it is still common”. Bred in captivity at the Cornell Raptor Program, some of Ithaca’s siblings were released into the wild to help bolster the New York population. She and one of her brothers were sent off to be education ambassadors, to help raise awareness of this fascinating and beautiful species. Ithaca is an energetic youngster, big even for a female hawk, and she loves sitting in the sun and watching chipmunks on the trail. 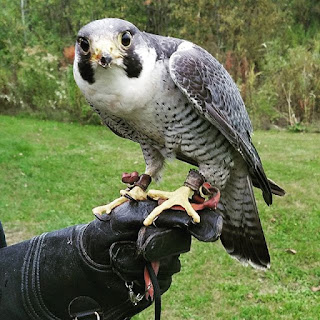 Hawaii was part of another educational raptor program in northern California before joining our flock. In 2008, he was found at a power plant in Nanakuli, Hawaii, having collided with something leaving permanent damage to his beak. Unable to feed himself properly, Hawaii was fitted with an artificial beak, but eventually grew back enough of his own beak to tear at meat – though he’s still a messy eater! Hawaii may look a bit like a bulldog with his massive underbite, but he is eager for food, playful, and fond of a bath. 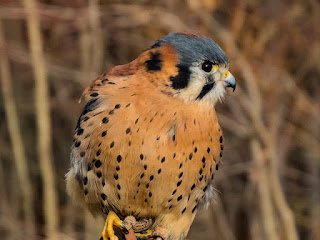 Back in September, Carol Winfield, a wildlife rehabilitator near Burlington, found a box on her front porch. Inside was an adult American Kestrel–with jesses on. These leather straps around a bird’s legs are put on to help train and restrain captive birds, so this little guy had obviously been in someone’s care. The trouble is, it is illegal to raise raptors in captivity without a special permit, and Westford is otherwise healthy, but has no chance of being returned to the wild. Because of his strong familiarity with people, he will make a great educator, and will be a wonderful help in teaching visitors of VINS the importance of letting wild birds be – to fly free.

Who are you most excited to meet and learn about?