Two days after finding the colony of nests, the second Great Horned Owlet, and at least one parent, our team (Peter, Grae, and myself) returned to the nest site at the College of St. Joseph. With a ridiculously long and heavy ladder, a laundry basket, some paracord, scale, some nets, and the little owlet who’d been brought to VINS, we were ready to build and seek a new home. 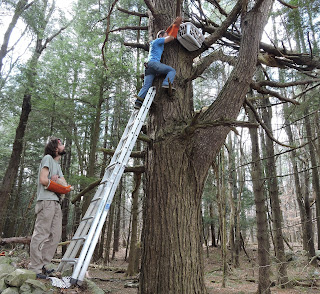 After caching all of this, the first thing we did was search for the wild owlet. Amazingly, after 36 hours, it was still perched atop the ten-foot-tall snag. Only now, where he was standing at attention two days ago, he was lying on his belly like a duck. Nonetheless, he looked healthy and alert. The second thing we did was search for an appropriate tree to make a nest in. Just ten yards away, standing next to a stone wall, we found it: a wolf tree, or an old, huge, split-trunked pine with gnarly, but hefty branches. Just 20 feet off the ground, two of these branches radiated out from the trunk, side by side: perfect for cradling our new nest.

While Peter and I wrestled the ladder into place on top of the stone wall, Grae filled the laundry basket with leaves and a carefully woven network of sticks—much more work than any Great-horned Owl would put into its own nest. During this construction process, Dick and Ann, the two who found the owlet, showed up with a few friends and family members, ready to share the enthusiasm and even some of the labor. They were delighted to hear how we found the second owlet and took some photos of our work. 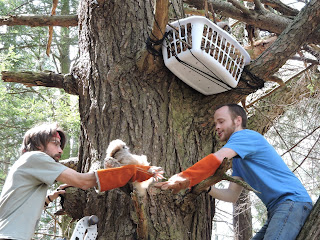 With basket-turned-nest in tow, Peter and I climbed the ladder and began lashing it into place. It is surprisingly difficult to stand in the crotch of a split-trunked pine and securely wrap paracord around a couple of branches to secure a laundry basket, but that is exactly what we did. Much to our relief, the gnarly branches of the pine held solid and we could comfortably maneuver everywhere we needed to. Our final task before calling it good was to drill holes into the bottom of the nest for drainage.

Now it was Grae’s turn to climb the ladder: this time up the snag to catch the wild owlet who had been watching the whole thing unfold. Up until now, the owlet had been watching with interest and without concern. When Grae ascended with a net in hand, though, he took to his feet and started beak clacking and hissing, two behaviors that we interpret as “stay away or I’ll attack!” For good reason, he was afraid of us. To the owlet, we were just a bunch of predators ready to pluck him out of his roosting spot and eat him. That, however, was far from our intention! By the advice of a professional raptor re-nester, our goal was to examine the owlet’s health, as we did with its sibling, and to re-nest them together.

Without even using the net, Grae managed to safely grab the owlet and ferry him down the ladder, all the while being gentle with his newly growing feathers and covering his big yellow eyes to keep him calm. Now it was time for the exams. 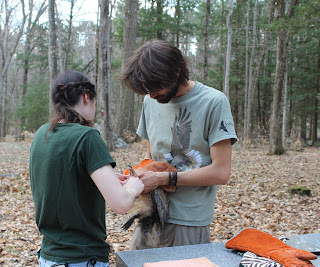 The only flat surface happened to be a stone alter-like table in front of the statue of St. Joseph. Thus, we carried both owls, some protective gloves, and a scale up to it and proceeded to examine the owlets. After checking their bodies for any signs of injury or malnourishment, we weighed the owlets and found them to be healthy, and very nearly full-grown.

With Dick’s help (it turns out he used to be a roofer!) we easily finagled the ladder back into place atop the stone wall and against the big pine tree. Peter climbed up to the nest, and we ferried the owlets up to him so he could place them gently into their new home.

At first, when both owls were back together, they looked at each other with shock and spread their wings defensively, not sure where the other had come from or what its intentions were. Then they quickly realized the bigger threat was the giant two-legged, ladder-climbing creature just feet away. Confident that they were not going to attack each other, Peter descended the ladder.

***
The next morning, Peter, Grae, and Anna went back to weigh them after their first night in the new nest only to discover that they had already left it! Both owlets now sat inaccessible at the far end of one of the anchoring branches. Probably, their parents had come back during the night with a tasty meal, alighted on the branch, and the young, already confident from recent adventures, scurried up and out after her, then found themselves in this spot until morning. 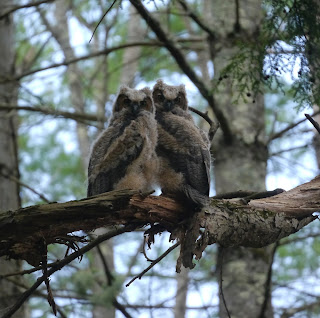 Our intention had been to weigh the birds twice to ensure that their parents had fed them overnight. Without this second weight, it was hard to be sure what had happened. However, since it would have been dangerous to try to get to them, the team went back to searching for signs. Sure enough, another few owl pellets turned up, as well as some discarded prey—the foot of a large songbird, most likely a crow, among those remains. This was a very good sign, showing the owlets had indeed eaten since we put them in this new spot.

After taking some pictures, videos, and time to admire these wild creatures, everyone headed back home. Over the next few days, Dick and his family drove out to check on the owls, and to make sure they were both safe. They were rewarded by seeing both young and the adult at various times this last week. With confidence, we hope that these two young owls will grow into capable hunters and beautiful birds of prey, and will be a vital part of this ecosystem for many years to come.