Spring means many things in Vermont, and for the Center for Wild Bird Rehabilitation (CWBR) at VINS, it means the beginning of baby bird season. As early as the second week of April, some local species already have new families well underway. 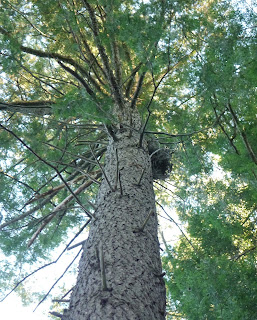 Dick and Ann showed up at CWBR on April 14th with a cardboard box containing the bird they’d found while hiking in Rutland, VT. Bringing the container in to the exam room, Grae didn’t have to open the box all the way to know it contained a very young bird: puffs of down coated the football-sized lump, out of which peeked two wide, yellow eyes. So it was that CWBR received their first baby bird of the 2017 season: a fledgling Great Horned Owl.

Being a fledgling means the owl was already making short explorations out of the nest to feel new perches under its growing feet. Many baby birds make such excursions even weeks before they can fly. This can be dangerous if the bird strays too far from its nest, or into an area containing cats, dogs, and cars. But for most wild animals, this is a time for the young to learn about the world while still being cared for by their protective and watchful parents.

A quick examination determined the baby owl was uninjured, and therefore should be reunited with its parents. Dick and Ann were concerned about this—after all, they had found the bird in the middle of a walking trail on a college campus. Wouldn’t it be dangerous to put the bird back in the same spot? Grae explained that a reunion would be much more involved than simply returning the bird. It would be a re-nesting: finding the old nest or creating a safe, artificial nest to place the bird in where it would be out of reach of predators. It seemed unlikely there would be no nest near where the baby was found. If he had fallen, he could not have traveled far. We determined to go see the place ourselves.

In Rutland, Dick and Ann led us to the place where their dog found the owlet. It was just off a trail, in a patch of large, old pines overlooking a garden at the College of St. Joseph. One look skyward revealed the nest; a collection of thin twigs, molded around larger sticks, bark, and dirt. It was conspicuous, about 60 feet up in one of these pines, but the occupants were not. We stared for a while, passing around binoculars, when Nathan spotted another nest. 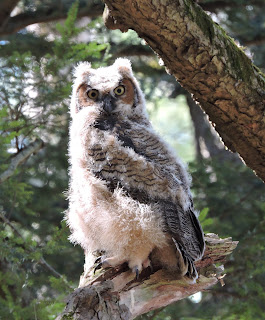 We switched to examining this one, wrapped around the trunk of another pine. Birds do build back-up nests, in case one is started in a less-than-ideal spot, and another area opens up later. Great Horned Owls, though, do not build their own nets, rather taking over the stick nest constructed by Red-tailed Hawks or Common Ravens. Because the owls nest so early in the year, it is possible for them to select the best of last year’s construction before the builders themselves return from their wintering grounds. One of these had to have been used by the Great Horned Owls—they were the right size and material, and the owlet had to have come from somewhere not too far away.

But… “Guys there’s another one.” Grae pointed to a 3rd nest.

“That’s…not the same one I was looking at,” I replied, pointing out a 4th.

In all, there were 6 or 7 large stick nests in as many of the pines growing in this stand. Many birds species do nest in colonies (think of penguins, or Purple Martins), and the density of nest sites is often related to how much food is available for all. Hawks and owls, however, rarely tolerate another nest within a certain distance of their own, no matter how much food there is to be found.

What we had found was not a huge colony of owls, but likely a group of American Crow nests. Crows are early nesters by songbird standards, but way behind owls. Whereas crows can be incubating eggs in early April, these Great Horned Owls had to have laid their eggs in mid-February at the latest, assuming the young one in our care was about a month old. The crows had been thinking of spring yet when these owls decided to nest.

The task was now to find which of the crow nests had been occupied by owls this spring, and that involved looking for signs. Nathan took off looking for casts, or owl “pellets”, under each nest tree. Because owls cannot digest the fur and bones in the prey they consume, their stomach compacts all of it into a neat pellet, which they then cough or “cast” up once or twice a day.

I noticed that one of the nest trees had whitewash, or projectile raptor poop, streaking down its trunk. Nathan scrambled over to this tree, and called back over his shoulder. “It is this one!”

Two owl pellets sat on the ground—one round and intact, with clean white bones poking out of dusty gray fur. The other had melted in the rain and fallen apart against a twig, but revealed the same kind of prey remains. There was no doubt that a Great Horned Owl had been here recently. And there was no doubt as to what had happened to evict the owlet—the nest was also “melting”, its twigs and branches spilled over the sides of the branch it sat on, with no neat cup to keep the young one contained.

The question remained, where is the adult?

The next step was to find a comfortable spot and sit silently in the woods, watching and listening for the adult owls. Having been trampling the dead leaves and calling back and forth to one another, it was unlikely we were going to just look up and see a wild owl. So we doubled back a bit, and were getting settled when Grae said, “Wait. Is—is that?—it is! An owlet?”

Right in front of us, staring back in our direction, was another fluffy, baby Great Horned Owl perched about 10 feet up on a tall snag. His body was facing away but his long, flexible owl neck was curved toward us, and his tiny ear tufts stood tall. 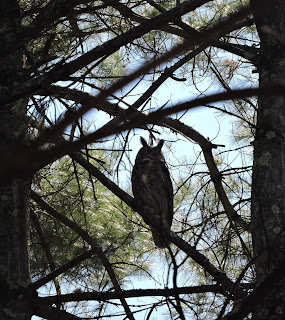 After taking a few moments to contain our surprise and excitement, we settled into quietly watching and listening into the darkening forest around us. The wild owlet never moved, but after a while did decide it was okay to ignore us. The Spring Peepers took up a few waves of calling, and the Northern Flickers hammered and squeaked at us from the trees. When half an hour of patient silence had gone with no sightings of an adult owl, Nathan gave a few Great Horned Owl calls into the woods, and Grae found a recording of a begging juvenile on her phone. When neither of these produced the adult after another 20 quiet minutes, we decided to leave and form a plan.

But before we could go, Grae froze, staring off into the woods. “There’s an owl… looking… right… at me…”

The rest of us turned to follow her gaze, and caught only a glimpse of the silhouette of an adult Great Horned Owl flying away into the forest. It made no sound as it went.

This is exactly what we had come to see—evidence that the young owls were still being watched over by their parents, even outside of their dilapidated nest. We had only now to construct a safe place to reintroduce our little fledgling to its sibling, and let the adult care for them both once again.

Check back in a few days for the conclusion of this re-nesting adventure!