There are few birds in Vermont with an appearance as striking as that of the pileated woodpecker. A crow-sized woodpecker, this bird is crowned with a shock of red feathers so bright they seem to glow. When a pileated raises that crest of red feathers, it’s a spectacular sight. In nature, pileateds peck out huge, rectangular holes in trees that are so large other birds are often attracted to feed there. 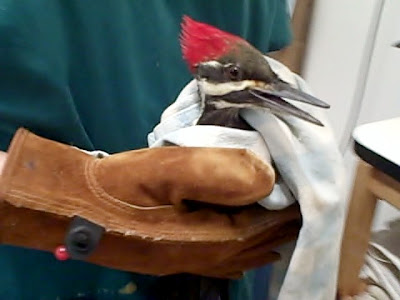 On Christmas Eve, a female pileated woodpecker flew into a house window in Middlebury, VT. The owners of the home took the bird in, and kept her in their bathroom until they could get her to a rehabber. The homeowners said the bird “redesigned” the bathroom, which probably means she drilled the woodwork in the bathroom. She was just being a woodpecker! (We always recommend injured birds — until they can get to a rehabilitator — are placed in a box with adequate ventilation and kept in a quiet, dark room. Confining the birds to a box rather than in an open room will reduce the bird’s stress level, while preventing it from flailing about and causing further injury.)

The bird came into our care Dec. 30. Upon examination, we found a fracture in her left wing. We also found the tip of her beak — her very long, hard beak — was a bit dull and not as pointy as most pileateds are. We treated the bird for head trauma and wrapped her wing to set her fractured bone. Soon, we’ll remove her wing rap and evaluate the progress of her healing fracture. From there, we may choose to re-wrap the wing, or, if the fracture site feels firm, we may leave it off. If this bird progresses, we’ll see her flying free again soon.