“All these injured birds are here because they share something in common. They are all here because someone cared enough to take the time to pick them up and bring them here,” said VINS Education Intern Sarah Sincerbeaux, at a recent raptor program. 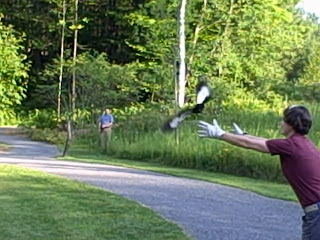 Watch a video of the pileated’s release. Above, Jessamy releases the bird.

So true. I was reminded of that the other day when one of my most favorite birds, the pileated woodpecker, was released at an artist’s reception held here at VINS. This lucky woodpecker was found just off Route 4 in White River Junction, VT. A woman noticed a spot of red on the side of the road and pulled her car over to investigate. That flash of color along the road turned out to be the red crest feathers of a hatch-year pileated woodpecker on the ground. She brought the bird to VINS where it was examined and found to have head trauma and bruising on its leg. The pileated was given fluids and a place to rest.

After a few days, the woodpecker was full of energy and moved to a larger enclosure where it was fed a delicious concoction of peanut butter, fruit and mealworms (it really does smell delicious, and intern Sarah Mac says that even the mealworms wouldn’t deter her from enjoying it!) The pileated definitely welcomed the sight of the mealworms stuffed inside logs, and pecked throughout the enclosure making a mess of worms and wood shavings.

After just six days in rehab, he was back to his young, energetic pileated woodpecker ways and ready to go back into the wild. The guests at the artist’s reception gathered around to witness another VINS success story. On the count of three, the young pileated took flight and after a flash of red, black and white, he was high up in a tree, pecking away. This young one almost did not make it through its very first year of life, but a second chance was given because someone cared.

Thank you to all the caring individuals who have brought injured wild birds to the Wildlife Services department at VINS!