Why Mess with Nature?

People often ask me why we rehabilitate wild birds. Some believe rehabilitators interfere with nature, and that it’s natural for a bird to sustain an injury or become ill. 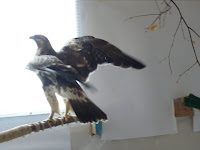 I agree that illness, injuries and death are all a part of nature. But I don’t feel there is anything natural about a wild bird being hit by a car, running into power lines put up by humans, eating a carcass containing lead bullet fragments, crashing into glass windows or losing one’s nest when a tree is cut down. (Above, a rough-legged hawk in rehab perches in front of his window.) When humans interfere with the health of a bird, I think it’s our responsibility to help them get better and return to the wild.

The New York Times featured an editorial today recapping Secretary of the Interior Ken Salazar’s national survey on bird populations. The newspaper called the report “grievous,” with one-third of the U.S. bird population “endangered, threatened or in serious decline.” The editorial mentioned the decline in bird populations as a “direct result of human activity.” That would be us.

Above, a mourning dove who was attacked by a cat receives food via a syringe.

There are things each of us can do on a small scale to improve the lives of the wild feathered friends in our own backyards. A couple ideas include leaving dead trees or those that have fallen to decay naturally in the woods. Woodpeckers enjoy these trees for insect treats, while owls may make their cavity nests in them. If you have large windows that birds keep smacking into, try putting up window decals that will help birds detect a flat surface. Have a cat? Try keeping kitty indoors. All cats can live happily indoors, and doing so would save billions – yes billions – of songbirds each year. For more information on how you can easily help prevent bird injuries, click here. 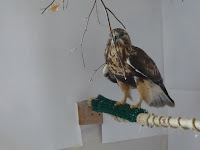 Above: a rough-legged hawk in Wildlife Services