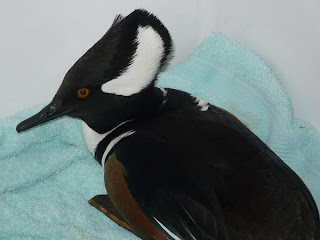 Wikipedia states that a superhero is a character with “extraordinary powers and abilities, relevant skills, and/or advanced equipment.” Meet the hooded merganser: waterfowl superhero.

A diving waterfowl, the hooded merganser plunges deep into rivers and lakes, using his extraordinary ability of altering his vision to better see his underwater prey of fish, crayfish and the like. Equipment-wise, mergansers – like other diving waterfowl – are built with their legs further back along their body to better propel them forward beneath the water’s surface. And just like Batman has a cool costume, the hooded merganser has an awesome crest on his head, which he can unfurl at a moment’s notice, expressing a variety of behaviors.

See a video of the merganser’s release here!

In early February, we received a hooded merganser at VINS that was found in the road. We suspected a collision with a car. The bird was a bit thin and had possible internal injuries, but luckily no open wounds or broken bones. His treatment was quite simple, as it took him about a day to eat the live fish we put in the tub in his enclosure. When a bird is eating well – especially live prey – it’s a good bet that he’s quite healthy.

After a few hardy meals of minnows and time to splash in his tub, we decided to release him after 3 days in rehab.