Up Close with a Raven

Each bird that comes to VINS for care receives a full exam upon arrival. We check everything: eyes, ears, nares (nostrils), legs, wings, body, and more.

Watch a video of this raven’s exam.

Yesterday, we received an injured raven who had been seen hopping around a woman’s yard for a few days, unable to fly. The woman captured the raven, boxed him up, and he was transported to VINS by a volunteer.

The first thing we noticed when we took the bird out of his crate was that his left wing was drooping, so we started the exam there. In addition to finding a fracture in that wing, we also found the bird to be quite thin. We started the bird on fluid therapy to get him hydrated, and wrapped the bird’s broken wing. 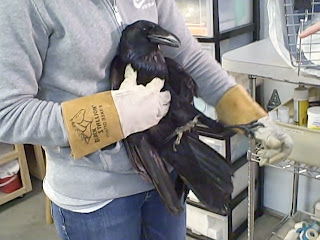 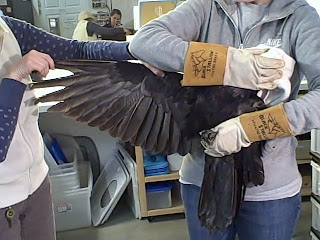 Tonight, we are starting the raven on solid foods. In a week’s time, we’ll remove his wing wrap to see how the fracture is healing. The raven is very bright-eyed and curious; we think he’ll make a full recovery.