The Numbers Are In 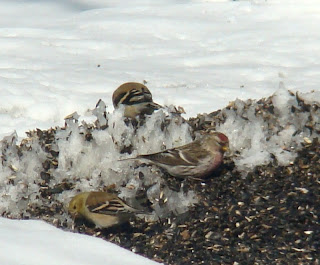 This year, the Vermont Institute of Natural Science helped more than 100 visitors actively identify and count wild birds as part of the Great Backyard Bird Count on Feb. 21.

The VINS team of VINS staff members and members of the public recorded a checklist tallying 7 different avian species, which was added to the 90,693 other lists submitted for the 4-day event. In total, 593 different species and 11,251,464 birds were seen in the United States and Canada.

For a proud “bird-nerd” like myself, the numbers alone are an impressive data-set, but in the hands of the Cornell Lab of Ornithology and Audubon this information will lead to the greatest understanding of our bird populations ever. Now a 14-year project, scientists have a broader perspective of the changes in bird movements, range shifts, and population trends in reaction to the ever-changing world. This year the common redpolls, just 18 seen in Vermont for 2010, numbered over 5,000! This species (pictured with the more common American goldfinch) is an irruptive species, absent in some years and present in others, most likely owing their presence to certain weather patterns.

The bigger total observation numbers of the top species for the whole count could point to bigger changes on the horizon; 2010 saw 1.85 million robins, where this year the high count was just 1 million. The leader of 2011 was the starling, an introduced and invasive European species, which nearly tripled from last year with 1.36 million views. Perhaps this is a glimpse of an invasive bird taking over an environment not adapted to balance such a competitor, or just a yearly spike in numbers. Year-by-year changes in distribution and density help us truly understand how the environment is indeed changing. I look forward to next years data.

Thank you again to all the visitors and VINS staff and volunteers. Special thanks to West Lebanon Feed & Supply for the sunflower seed for the VINS’ birdfeeders! Photo by Bob Heitzman.