Earlier today, the sun was at its highest point in our sky–the highest it will be for the rest of the year. Today, June 21st, is the longest day of the year, at just about 15 hours and 33 minutes. Perfectly timed to make the most of the beautiful weather!

What is a solstice? The words solstice itself comes form the Latin words sol (sun) and sistere (to stand still). Many cultures, from Native American groups to the ancient Egyptians, have holidays or rituals surrounding the summer solstice. In some places it is celebrated as the beginning of summer, others as the midpoint or “midsummer”. There is even some architecture that takes advantage of the sun’s position during the solstice, creating views that can only be seen once per year.

Solstices occur on any planet orbiting a star, when one of its poles is most inclined towards that star. Since the Earth’s axis is tilted with respect to the sun about 23.4 degrees, during the summer solstice, the northern hemisphere is dipped more dramatically towards the sun’s rays than at any other point in the year. On this day, if you are standing on the Tropic of Cancer (a latitudinal line at roughly 23 degrees North, going through Mexico, Egypt, Saudi Arabia, and India) the sun will traverse the sky directly overhead. By comparison, an equinox occurs when day and night are of exactly equal length: in the fall and the spring. 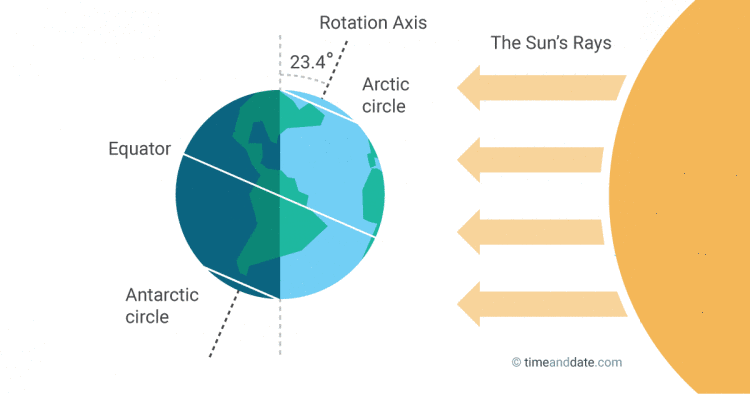 A common misconception is that the Earth is closest to the sun during summer–not true! It is in fact farthest away at this point. Though summer is hot and winter is cold, these temperatures have everything to do with the amount and angle of daylight experienced by different parts of the Earth each season, and nothing to do with distance to the Sun.

However, it’s not the summer solstice everywhere on the planet. Today is the winter solstice in the southern hemisphere, and places like Chile, Australia, and South Africa are experiencing the shortest day of the year, as the Earth tilts them away from the sun by 23.4 degrees. Ushuaia, a city in far southern Argentina, will experience just 7 hours of sunlight today.

What are you planning to do with your extra moments of daylight today? Let us know!