Members of the accipiter family, sharp-shinned hawks are small and built for quick maneuverability as they are aerial foragers, meaning these fast birds catch their prey on the fly. 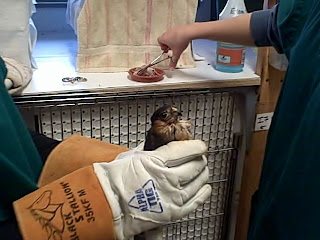 Above, VINS staff gets ready to hand-feed the sharp-shinned hawk.
Watch a video of this hawk being hand-fed!

No matter the build of a hawk, hawks require both eyes to hunt well. So one of our latest patients, a sharp-shinned hawk — or “sharpie” — presented in a troubling state. The small bird came in with trauma to the right side of his head, and blindness in his left eye. We believe he probably flew into something, such as a window or a car. After a few weeks in our care, the bird still had not recovered vision in his eye, so we had a local veterinarian take a closer look.

Upon examination, the vet saw the blindness was caused by neurological damage to the brain, which cannot be reversed. You may have picked up in the previous paragraph I noted that while the trauma (meaning blood, swelling and suspected site of impact) was on the right side of his head, the eye that was blind was the left.

The good news is that the sharpie is eating on his own after weeks of needing to be hand-fed by staff. However, since he is permanently blind in one eye and cannot survive in the wild, the VINS Wildlife Services department will try to find a permanent home for this little raptor to live out his days. Many non-releasable birds live healthy lives at nature centers such as VINS, serving as ambassadors to their species.