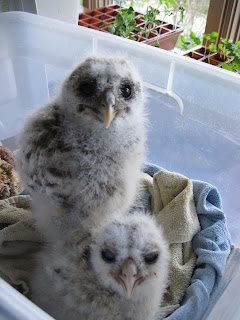 Wild owls are a fierce bunch. With knife-sharp talons and flesh-ripping beaks, these birds of prey are high in the food chain and not to be messed with.

Watch a video of one of our baby owls getting his bandage changed!

As babies, however, owls look like soft, fluffy balls of innocence. Sure they’ve still got talons and a decent-sized beak, but their downy feathers and big, child-like eyes make them appear far less threatening than their full-grown counterparts.

The VINS Wildlife Services department now has three baby barred owls in its care. Each one came from a separate nest, and none were able to be re-nested due to various circumstances. We always encourage the public to re-nest baby birds (whether its a songbird or a raptor), because the parents always do the best job of raising their young. We’re good foster parents here at VINS, but bird moms and dads know baby birds best. It is great, however, that these young barred owls have each other to spend time with — they are far less likely to imprint on humans when they can associate with others of their kind.

For now, we are hand-feeding the owlets chopped mice and keeping them together in an indoor enclosure. Just yesterday, they began eating food left in their enclosure on their own. They grow up so fast! They’ll soon be independent, flying, and ready to take flight into the wild where they belong.