‘Once upon a midnight dreary…’ 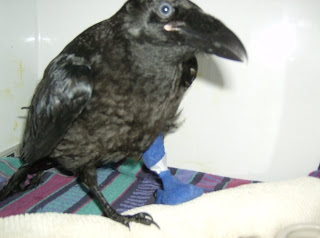 In Edgar Allen Poe’s, “The Raven,” we meet a stoic raven “once upon a midnight dreary,” whose foreboding repetition of “nevermore” sends a young man into a state of madness. In England at the Tower of London, it is believed that if the ravens who reside on the grounds leave, the kingdom of England will fall. In some Native American tribes, ravens are considered at once creator and trickster, and are present in numerous cultural tales.

It’s a fact: people like ravens. They are mysterious, smart and just plain neat to see. On June 16, VINS Wildlife Services took in a young raven with a broken leg. While the leg has been splinted and the bird is stable and eating, there’s more to this raven’s tale than meets the eye.
It was apparent from the start that this bird was no ordinary raven. For one, he has not appeared nervous around us at all. Normally a wild bird is either anxious and timid around staff, or feisty and ready to fight. This raven, however, seems quite comfortable being handled. There is no fear or apprehension on his part.
Secondly, the raven has been gravitating toward us, literally. When we open his enclosure to feed him, he may jump onto one’s shoulder. One time, he even pulled on the ponytail of a staff member when she turned her back on him.
And last but not least, while we’re aware that crows and ravens can often be heard making odd gurgley noises that are so far off from the “caw” call we associate them with, we’re pretty darn sure we’ve heard this bird trying to say “hello.”

All these factors have led us to believe we may have an imprinted raven, meaning the bird had been kept illegally and raised by humans, and has since begun to think of himself as human. We’re guessing whoever had him in captivity called out “hello” to him, and this raven — being the smart fellow he is — is mimicking what he has heard. While the raven’s leg injury prognosis remains to be seen, if the bird is imprinted, we will not be able to release him from captivity. An imprinted bird simply cannot survive in the wild. There is a chance, however, that the bird is instead habituated, meaning that he was initially raised by his own parents and thus imprinted onto them, but then was taken in by humans and got used to living with them. Habituation is reversible. Imprinting is not. We may be able to pair him with another rehabilitator’s wild fledgling raven so that we can better understand if he is imprinted versus habituated — that may be his only hope for a life in the wild. 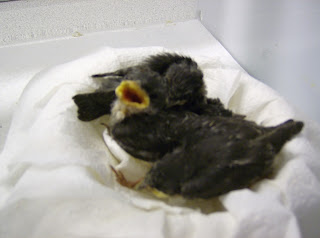 We love birds and we can understand it may be tempting to care for a young bird who believes you are his or her mom, but imprinting a bird is one of the worst things that can be done to it. Wild birds need to stay wild. If you find an injured or orphaned birds, bring it to a rehabilitator as soon as you can. The longer the bird is in your care, the more likely he or she will become imprinted.
Wildlife Services also received a group of tree swallow nestlings Wednesday whose parents were both killed by a house sparrow (house sparrows are known for being aggressive toward other birds and their babies). A kind couple took in the birds and fed them, but unfortunately the baby birds were kept by the people for at least a week. The baby swallows are suffering malnutrition due to an incomplete diet, and appear poorly developed. They may not survive their childhood. Again, the intentions of the humans were good, but those good intentions may cause the birds to be unreleasable, or even to die. Five tree swallows came in, and one has already been euthanized due to a severely crooked jaw that could not have properly healed.

So when you find an injured or orphaned bird, call your local rehabilitator and let them do the dirty work! Rehabilitators will feed them and provide medical care — you just need to make the call : )