Nevermore: Returning a Raven to the Wild

Halloween is not my favorite holiday. Shadows obscuring a midnight sky, dry leaves rattling against my window, scary stories, haunting and ghosts; none of these are among my favorite things. I like to spend the weeks surrounding October 31st partaking in entirely un-creepy activities, like baking or yoga. As a kid, on Halloween, my mom and I would spend our evening watching movies set in tropical places and absolutely not changing the channel in case a neighboring station was showing some horror flick.

But here in New England the Halloween spirit is hard to ignore. The seasonal changes in Vermont bring out deeply embedded traditions, even in the most reluctant of us. The weather here seems to be an active participant in all of our holiday traditions. This Halloween is no exception and not even I am immune to the changing colors, blustery days and one particular bird that really changed my mind. 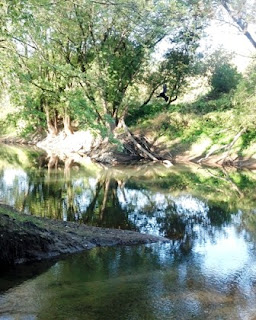 About 5 weeks ago, the Center for Wild Bird Rehabilitation received a common raven from Pittsford, VT. This bird, in unfortunate circumstances, was very lucky to have been discovered by a VINS transport volunteer. She found the bird at the intersection of two creeks on a public conservation area. The raven was hopelessly tangled in fishing line and hanging over the water from its left wing. You can see him in this photo; the black shape to the right of the trees.

This kind of rescue can take a lot of patience and hard work. Thankfully the transporter was ready for the struggle and worked for a long time to free the raven and eventually got the bird to our rehab facility.

The young raven, in its first year, arrived underweight, losing heat, dehydrated and in shock. His left wing was askew, drooping away from the body; likely suffering from nerve damage. 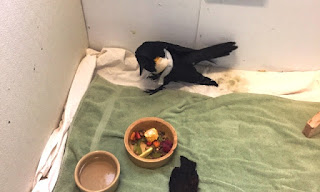 The rehab staff spent the following weeks monitoring the bird, fearing that the damage would be permanent. Then he surprised everyone.

Within a couple weeks of admission, the raven took his first flight. Four days later he was transferred to a flight cage where his strength grew and flights improved. It was an improbable recovery for this lucky bird.

This is where I come into the picture. In my role with the education department, I only occasionally get to spend time with our patients. So when Annie came in on a sunny October day looking for a co-pilot, I jumped at the chance to join her for the release.

It is our protocol to release a rehabilitated bird as close as possible to the site where it was found. We loaded up the bird and drove for about an hour and a half before we found the trail head at the Cooley Covered Bridge in Pittsford. 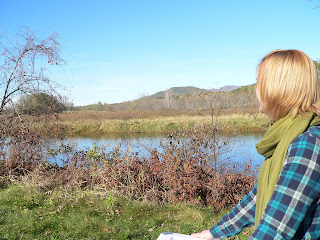 Here is Annie carrying the raven to its picturesque release site. At the intersection of two streams, the Green Mountains rising in the backdrop, the bright blue of a fall morning welcomed the bird back to the wild, we opened the container and he flew off.

His first flight out of our facility was a testament to one note a rehab intern wrote in his file. “Had a bit of trouble catching this one! Banking turns and flying all around!”

The raven perched in a tree near by, preening his feathers and getting his bearings.

Knowing how smart corvids are, I wondered how aware this bird was of his return to the site of his nearly fatal accident. Corvidae is a family of birds including ravens, crows, jays, that are considered the most intelligent of all birds. Different species in the group have exhibited tool building and facial recognition. They’ve been known to recognize, remember and respond to threatening people or situations. They have self awareness and even fear death.

It seemed strangely appropriate to be releasing this eerily smart, darkly perceived bird who narrowly escaped death so close to Halloween. Even for a skeptic like me, the day reeked of supernatural significance.

It was only a few days later that the Northern Stage’s youth actors performed Edgar Allen Poe’s The Raven at our Halloween celebration. I watched the cast, clad in all black, bringing to life Poe’s dark classic, and for the first time I didn’t avert my eyes when it got creepy.

I think I’m going to enjoy Halloween this year.