My, what a long beak you have. 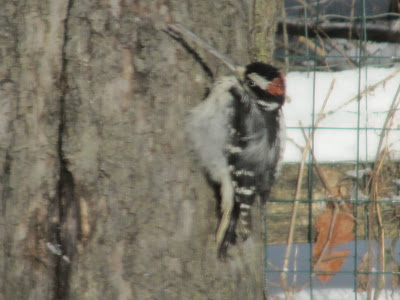 Woodpeckers need strong, long beaks to jackhammer their way into trees and get to the insects and sweet sap below the bark. But this downy woodpecker spotted in Hartland, VT? His long beak is grossly oversized.

Throughout the United States, biologists are finding birds sporting extra-long beaks. Known as avian keratin disorder, this deformity occurs in numerous species of birds (and especially black-capped chickadees and northwestern crows) when the keratin layer of the beak becomes overgrown. Keratin is protein, and in humans, it’s what makes up our skin, hair, and nails.

While the cause of avian keratin disorder has yet to be nailed down, some scientists believe the deformity may be caused by pollutants in the environment such as organochlorines, which are found in some pesticides. They are also looking at nutritional deficiencies and disease as possible causes. Studies on these deformities — which may also include crossed beaks, overgrown talons, enlarged leg scales, and feather discoloration — show that baby and juvenile birds are spared, suggesting it’s likely not a genetic disorder. But much research remains to be done to target the cause.

As you can imagine, deformed beaks can make feeding and drinking difficult for birds, and some birds will die of starvation as they are unable to properly eat. The woman who observed this woodpecker several times in her yard said the bird appears to have adapted. He is able to eat suet, drink from her bird bath by laying on his side, and has eaten seed. She has even seen him attempt to drill into trees. 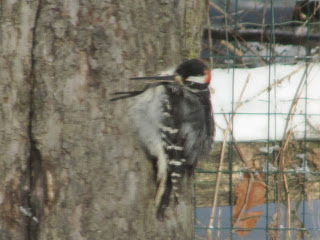 If you observe birds with deformed beaks or talons, report them to your local Fish and Wildlife office. You can email photos to Meghan at VINS at moliver@vinsweb.org.