‘Moor’ Than Meets the Eye 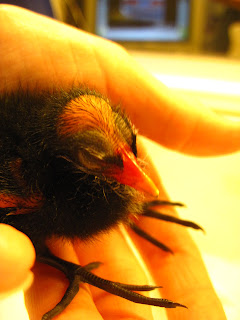 Last week, the staff in Wildlife Services received an interesting patient. It was small, fuzzy, had a beak that looked like candy corn and giant feet. We had never seen anything like it! Initially we thought it was a young sora, but after searching through several books and a few web sites, we were able to identify our mystery patient: a baby common moorhen.

Watch a video of this young moorhen.

This is a very unique species, for moorhens are not commonly seen in Vermont. The bird was discovered in a marshy area of Lake Champlain, struggling to stay above water.

Once it arrived at our facility, we did a thorough exam and found that this little one was suffering from a form of spinal trauma and was unable to stand. But what could have caused this trauma on an otherwise healthy bird? If a snapping turtle or large fish bit at it, surely there would be signs of trauma.

Well, there is a somewhat dark side to the moorhen. Each breeding season, a female moorhen can lay up to 10 eggs, which means 10 hungry mouths to feed. Sometimes there just isn’t enough food to go around, and the solution for an adult moorhen is to violently attack and kill some of its young. 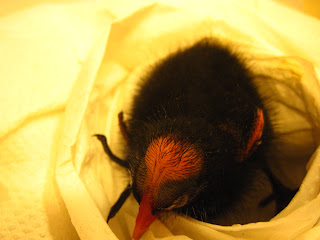 This method, in the end, leaves the parents with fewer chicks to feed, which allows for a higher chance of survival for the remaining youngsters. Given that we found no open wounds on the bird, the baby could indeed be a recipient of violent shaking from the parent that did not cause death, but merely damaged the spine.

Unfortunately, although we did our best, our little patient did not make it through the night. This story is just an example of how nature, in all its glory, can also have its dark (but practical) side.