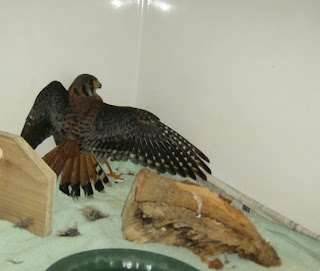 Oh, what one will do when in love. We’ll make fools of ourselves trying to win over our sweetie. We’ll lose sleep and our appetites when we’re in love. We’ll follow our love to the ends of the earth. As the song goes, when it comes to love: there “ain’t no mountain high enough, ain’t no valley low enough.”

And for two recently admitted kestrels, there ain’t no stovepipe long enough!
Last month, homeowners in Glover, VT heard a rattle in a stovepipe along the exterior of their house and, much to their surprise, found a pair of very sooty American kestrels inside.
The birds — a male and female — are likely mates who thought the stovepipe might make a good nesting site. These small falcons are cavity nesters, and it’s possible that upon entering the opening of the stovepipe, they did not realize it would drop down so far and wind around the house. The two followed each other into the pipe and could not get out. The female kestrel’s leg was caught in part of the piping, and her partner stayed by her side. Whether or not he stayed out of loyalty to his partner, or because he just couldn’t get by the female to the exit, well, we’re not so sure. While it’s easy to let one’s mind wander, we have to be careful to not anthropomorphize these birds too much.

Based on the apparent weight loss the two endured, it’s likely they were caught in the pipe for days. They were both moderately dehydrated, and were completely covered in soot. We slowly began hydrating the birds, eventually moving them onto solid food. 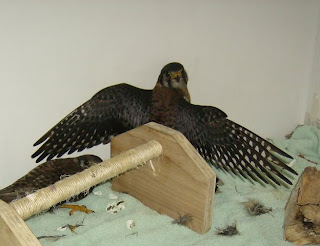 So far the couple has received four baths to remove the soot, but they still have a grayish tinge to their feathers. The birds also received phosphorous, a homeopathic that helps treat birds who have respiratory issues. Although the birds are breathing well now, we gave them the phosphorous as they likely breathed in quite a bit of soot while in the stovepipe. The birds’ weights are on the rise, and both look like great candidates for release.
Photos: Top right, the male kestrel in his rehab enclosure. Center, a video of one of the kestrel being bathed to remove soot. Bottom left, the male kestrel spreads his wings in his enclosure, while the female ducks behind the perch.
VINS| Raptor| VINS Wildlife Services

4 Comments
BACK TO NATURE BLOG