It’s all about brumation, baby. 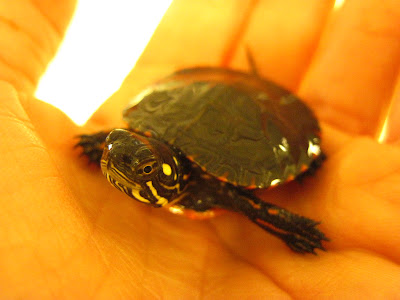 Being ectothermic species, reptiles and amphibians rely on the outside temperature to control their body temperature, unlike us mammals or birds.

At this point in the winter, most animals have either migrated, entered into torpor, or started hibernation. For a snake, turtle, or frog, they enter a state of dormancy called brumation.

So, what is brumation? It’s a process similar to hibernation, but reptiles and amphibians, unlike some mammals, are not living off fat reserves to make it through the winter. A turtle, like the one you see here (a baby painted turtle who lives at VINS), will overwinter under submerged logs, bury themselves in mud at the bottom of a pond, or use beaver or muskrat burrows for their period of brumation. The turtle then slows down all of its metabolic processes to the point where, if found, it may look dead.

Snakes, on the other hand, are commonly found using communal hibernacula. Researchers have found around 30 to 50 snakes overwintering in the same site — and not all are the same species! Common gartersnakes, eastern ratsnakes, timber rattlesnakes, milksnakes, and others have all been known to share the same hibernacula. Imagine stumbling upon all of those snakes!

While you can commonly find species of reptiles like toads buried under the mud in a pond, there are other species of reptiles who are the front runners for surviving freezing temperatures. Species like wood frogs, spring peepers, and gray tree frogs can adapt to stressful and harsh environment by literally freezing their bodies. By releasing glucose (sugar) throughout their body, water content is greatly reduced within the body and dispersed away from major organs. As the frog continues to freeze, all bodily functions cease. Don’t despair though, after a few hours of thawing, these frogs are active and reanimated!