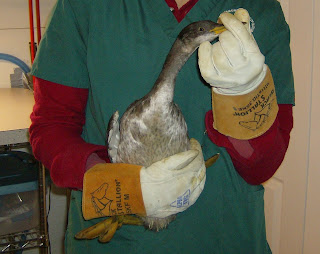 Last week in Wildlife Services we were presented with every bird nerd’s dream: a mystery bird. Both the person who found the bird and the person who brought it to us were scratching their heads about what it could be.

Click here to see this mystery bird get released!

It was clearly a water bird, indicated by the long neck and placement of feet far back on its body. Its head shape and angle of its bill pointed suggested a loon or cormorant, however we quickly eliminated cormorant because our bird lacked the hook at the end of its bill. It had the long, pointed bill of a loon, yet its body seemed small, even for a juvenile loon. Its plumage was gray with little variation, and even a loon in winter plumage has distinct, albeit dull patterns on its feathers. Yet, our bird was aggressive, striking out with its beak when we tried to retrieve it from its carrier, and loons are notorious for being fierce in captivity. 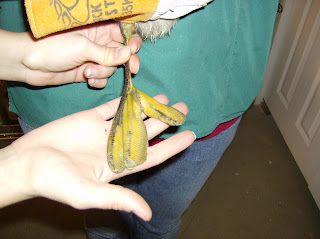 However, one characteristic of this bird stood out among them all: its remarkable lobed toes. Unlike the webbed feet of a loon or duck, the feet of this bird had four separate toes, each one with wide lobes for paddling through the water. These feet belonged to none other than a grebe, and judging from the yellowish beak and all-over gray plumage, a red-necked grebe in its first year. Later, this grebe will develop a rusty red throat, but for now its neck was only slightly pink. In Vermont, red-necked grebes are migrants, passing through on their way to winter nesting sites.

After its examination we determined this bird to be healthy, but disoriented from being grounded during migration. Like loons, grebes can mistake our highways and parking lots for water during migration and try to land. Since their feet are placed so far back on their bodies, grebes are extremely awkward on land (some species are incapable of walking altogether!), and taking flight from the ground is nearly impossible. We decided this bird was ready for immediate release, and there, in the Connecticut River, the grebe displayed for us its special talents: swimming and diving. Once back in the water, it was a natural! Click here to watch a video of the grebe release.