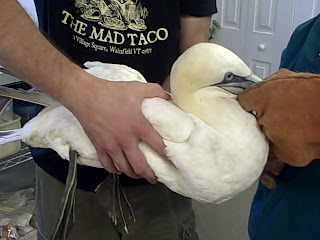 Flooding and heavy rains were not the only things blown in by Tropical Storm Irene. The day after Irene swept through Vermont, VINS received two pelagic birds -– birds who spend most of their lives on the open ocean and only come ashore to breed once a year. For those rusty on their geography, there is absolutely no ocean shoreline in Vermont.

Our first Irene victim was a northern gannet (watch a video of the gannet’s exam), who presented severely dehydrated, emaciated, covered in lice, and suffered from central nervous system damage. The second species, a Wilson’s storm petrel, was dead on arrival, but is the only one of its species ever recorded in the state. Both birds were found in Hartland – it was shocking to all of us to see two pelagic birds so far inland.

Wildlife Services Manager Sara Eisenhauer explained that the birds likely became disoriented and were blown off course due to the heavy winds and rains of Irene. They were disoriented all right … a rural town in central Vermont, Hartland looks nothing like the open ocean! 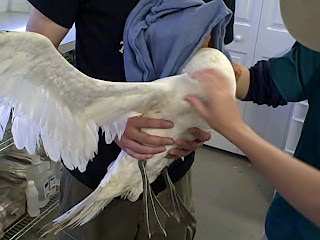 While in the VINS rehab center, the gannet was examined, treated with a homeopathic medication for central nervous system damage, and was tube-fed with a protein mixture. The VINS staff coordinated with the Center for Wildlife in Cape Neddick, Maine — accustomed to treating gannets — to offer the gannet the best care possible. Not having a large outdoor tank, we housed the ocean bird in an outdoor stall equipped with a kiddie pool.

Unfortunately, our gannet did not make it: the central nervous system damage remained consistently debilitating throughout treatment. On Sept. 1, the gannet had to be euthanized. According to the Cape Neddick Center for Wildlife, neurological problems are typical among the gannet family, due to protozoa from human waste found in the ocean. In other words, the central nervous system trauma may have been a prior disability, rather than a consequence of being buffeted by the storm.

Check back next week to read about the Wilson’s storm petrel brought to VINS, and learn why this amazing ocean bird has a tube on its beak!