In Memory of Kentucky

Kentucky, the exhibit Eastern Screech Owl, passed away overnight on December 25th. Our records showed that he was at least 14 years old, but may have been older considering he came into care as an adult, and there is no easy way to tell the difference between adult and juvenile plumage. Research has shown that the oldest known Screech Owl was around 14 years old, so he certainly lived a long life for such a small bird.

VINS received Kentucky from the Raptor Rehabilitation Center of Kentucky in 2004, where he was initially treated for injuries sustained after being hit by a car. He suffered severe head and eye trauma. His right retina was detached due to the force of the trauma and, unfortunately, he lost considerable vision in that eye, which, could be observed as a mis-shapened pupil. He also had a very noticeable beak malocclusion, in which his upper and lower mandible were not aligned correctly. With all these factors compounded he was deemed non-releasable.

The Screech Owls are a favorite among guests of VINS (if you could spot them!) due to their small size and elusiveness. Their overall camouflaged appearance and preference for tree cavities makes them extremely difficult to see out in the wild. Kentucky could often be seen hiding in plain sight, surprising guests who had difficulty searching for him, only to find, minutes later, he had been perched right in front all along, unblinking and motionless. 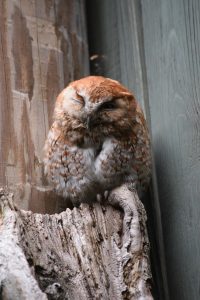 His cause of death is not completely known, but it would appear that he died due to heart failure as a result of old age. Our necropsy also showed that he may have had fibrosarcoma, cancerous tissue; developing in and around a bone of his right wing. It is an aggressive cancer, that may be prone to spreading throughout the body, and would have been extremely difficult to treat in such a small, elderly bird.

In his long years here, Kentucky educated many thousands of people on Screech Owls and the environment. He certainly was a great ambassador for his species. His calls will be missed, as well as the daily search to find him hiding in plain sight in his enclosure. This death was especially difficult due to the recent death of another exhibit owl, Louis. The fact that both lived extremely long lives is a testament to the amount of care that all the staff put into these birds day-in and day-out. Both birds were given a second chance at life when they were rescued by caring individuals. We can all revel in the fact that they lived long lives, they were given the best care possible due to the tireless work of staff and generous donation from the public, and they inspired people daily to care for them and their wild cousins in their native habitat.