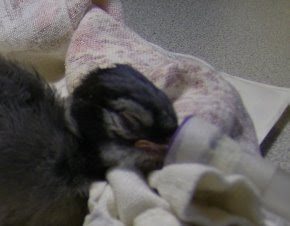 “But I’m getting better!” we can just imagine one of our fledgling blue jays saying. On May 31, a young blue jay was found on the ground in Essex Junction, VT, struggling to move.

Believed to have fallen from the nest, the bird had broken his leg, with the bone poking clean through the skin.

VINS Wildlife Services took the jay in and immediately splinted the leg while the bird was under anesthesia. The leg was then re-splinted to better align the bone by cutting back some of the skin around the break. This allowed for more flexibility while working with the leg, and for staff to better line up the separate sections of bone. 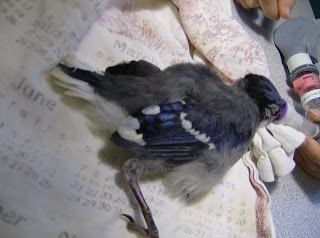 The jay is now in an enclosure with a younger blue jay who came in June 1 with a wound on his right hip and left leg. We suspect the younger jay’s injury stems from a cat attack. His wounds have been cleaned and although there is some swelling in the hip region, he is healing well.

Since both birds are fledglings, they are hand-fed an assortment of foods (ranging from meal worms to soaked kitten food) every hour. Soon they will be moved to a larger enclosure to practice flying and begin eating on their own.

Below watch a video of the the two fledgling blue jays perching side-by-side in their enclosure. You’ll notice the younger blue jay in the back is still gaping for food. Gaping is when they open their mouths and call so that their mom will put food into their mouths. Essentially they are saying, “Hey! I’m hungry. Put some food in my mouth, please!” The blue jay in the foreground is the older jay — you will see his splint on his right leg. Above, the older jay goes under anesthesia so that staff can set his leg.