Tens of thousands of visitors to the ; thousands of students in classrooms across northern ; hundreds of summer camp children and countless staff members. All numbers, yes, but all represent the people that interacted with one very small being: our male American kestrel. 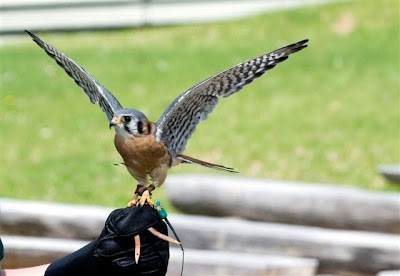 It’s difficult to gauge the impact of one animal in the lives of all these people. To some, he was an adorably cute little bird they saw fly in our educational programs. To others, he gave an up-close view of a raptor, demonstrating the quick flight of a falcon. Yet to the staff and volunteers at VINS who knew him best, our resident male kestrel was all those things and also an amazing colleague. His recent passing in early February due to complications from old age left us all saddened.

Watch a video of our male kestrel flying to a VINS staff member.

Raised illegally by people –- and consequently imprinted on humans –- he was very comfortable around staff and members of the public. Although those of us in the field work to prevent wild animals from being raised illegally in captivity, as an education bird, it made him quite the easy bird to work with and train. He was not afraid of humans and allowed most anyone trained in holding him to do so. Granted, he had a peculiar fear of hats, but everyone has their quirks. 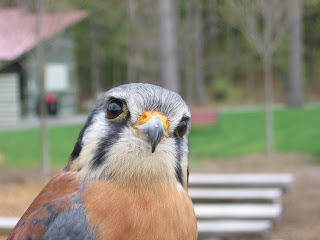 Since he had no physical injury, our male kestrel was trained to fly in our programs, and for six summers he was one of the most popular birds we had. He flew long distances across the VINS property to show visitors the wing and tail shape of falcons, once even perching on the cut-out of a bird silhouette held by a young man attending the program. He would often skim right over the heads of audience members and fly to a nest box to display the cavity nesting nature of the species.

Occasionally he liked to take little hunting forays to catch grasshoppers during our outdoor education programs, and one day he had larger ambitions. He unexpectedly dove head first into some tall grass and did not come up. When approached, he was seen jerking his head up repeatedly in a strange way. Upon closer examination, we discovered that he had caught a huge vole and was in the process of killing it. Hopefully it was memorable for the audience that saw it. It certainly was a momentous day for he and I; both of us beaming with pride.

It’s never an easy thing to see a loved one pass, and although he was not a pet, he was most definitely loved. All the animals we work with here at VINS have different personalities, likes and dislikes, and overall wholly different attitudes. We give them the best care possible and strive to ensure that their quality of life is excellent. And for these efforts we are rewarded with extraordinary experiences shared with some of Earth’s most amazing animals.