Fierce Predator of the Night 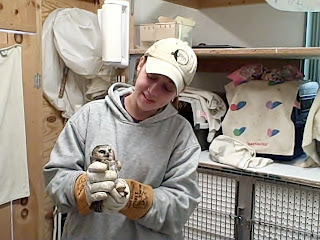 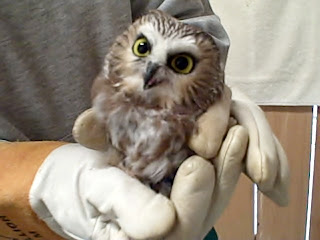 When people first see a saw-whet owl, their initial reaction is usually an exaggerated “awwwww,” similar to how one might respond to seeing a fuzzy kitten playing with a ball of yarn. There’s no doubt about it: saw-whets are adorable. Watch a video of this owl!

But while these owls are tiny in stature, they have all the same characteristics of the big guys, like great-horned owls and great gray owls. Saw-whets have the disc-shaped face (to funnel sound into their big ears), large, all-seeing eyes, and silent flight. Their beaks and talons may be minuscule next to those of a great-horned, but they can still hunt with the best of them, capturing mice, vole and other critters roaming the night.

The VINS Wildlife Services department recently received a saw-whet owl into care. The owl, found by a local woman in her garden, sustained a fracture in his left wing. We suspect the owl was struck by a car, or perhaps temporarily caught in the garden fence. The wing is currently wrapped to allow time for the bones to grow back together. See our video of this adorable (but fierce!) hunter of the night. Listen to him as he claps his beak. Owls clap their beaks open and shut to appear threatening. When the great-horned owls do it, it’s quite intimidating. When the saw-whets do it, it’s just darn cute.

In the photos above, the saw-whet is taken out of his enclosure to be weighed by wildlife keeper Sara Eisenhauer.