Duck Gets His Winter On 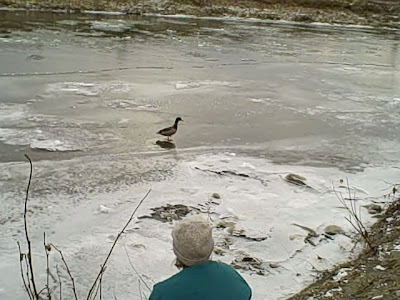 Sometimes, you just have to wonder how birds get into the situations we find them in.

Watch a video of a duck’s return to the wild.

This mallard duck, found December 27, was spotted sitting under a ski lift at Okemo Mountain Resort in Ludlow, VT. Was he flying past the mountain, and hit wires on the lift? Could he have gotten disoriented, and thought he was landing on a lake? Or was this duck a thrill-seeker, skiing down the mountain on his webbed feet for fun?

Well, he probably wasn’t skiing, but we’re not quite sure how this guy landed on a mountain. After we examined him, we found no visible injuries, but he was thin. We hydrated him with clear fluids and eventually bumped him up to solid foods. He put on weight, waddled nicely, quacked a lot, and could fly. After nine days in our care, this drake was ready to go.

Above, VINS intern Katie Christman watches as the duck makes his way across the ice. Below, Katie (left) and intern Hannah Goldman prepare to release the duck. Below that, an up-close shot of the mallard. 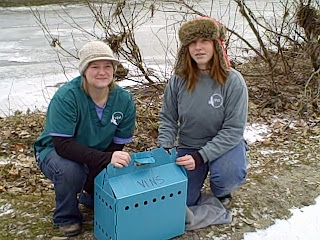 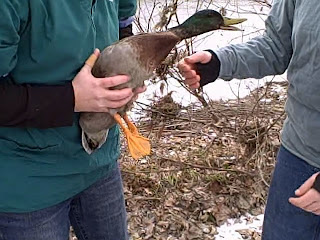 Since we couldn’t release him back on the ski mountain, we took him to a river where hundreds of mallards were spotted just days before. As you can see in this video, he takes to the ice quite well (is he an ice skater, too?!), but takes some time getting accustomed to his new surroundings. The women who released him said in about 10 minutes, he flew up into the air and then joined the sord of ducks further down the river. All in all, a very happy return to the wild for this sporty winter duck.