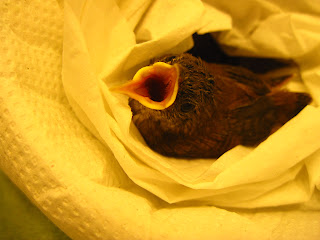 When a delivery truck pulled up to a store here in Vermont, the recipients of the trucks’ goods got far more than they bargained for when out popped five baby birds. Here’s the scoop.

Watch a video of the baby wrens.

A mom and dad house wren thought they had found a safe, dry home to build a nest in a seemingly out-of-use truck at the Vermont Country Store. For days on end they dutifully built a nest of twigs, leaves and stems, tucked into a track in the truck. The mother laid her eggs, incubated them and began to raise a clutch of chattering wrens. But a few days into the young birds’ lives, the truck roared to life, and the babies — nest and all — were on their way to Nusantara in Rutland to make a delivery!

Luckily, the folks at Nusantara heard the chitter-chatter of the baby wrens upon unloading the truck, and were able to extract the nest. Many hours had passed since the babies’ last feeding, and they were a bit weak and dehydrated. To drive them all the way back to the Vermont Country Store in such a state would mean risking their lives, so to VINS they came.

Unfortunately, one of the wrens had to be humanely euthanized as he fractured his leg at some point in his journey, and the bone damage was irreparable. But we’ve still got four active, healthy baby wrens with us here at VINS, who we’ll finish raising then return to the wild. In the meantime, the wrens are keeping our facility abuzz with their delightfully scratchy calls.