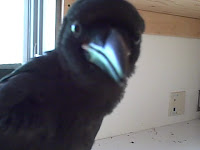 I love crows. I love them so much that I’ve nearly driven off the road trying to catch a glimpse of them as they fly overhead while I’m driving. I love all birds, but crows — and their corvid cousin, the raven — are at the top of the list for me. I can’t quite explain it, but there’s something about crows and ravens that makes me feel as though I’m in the presence of something very special.
Watch a video, posted below, of the crow pictured above, who was confiscated by a Vermont U.S. Fish & Wildlife game warden.
Last week, the Wildlife Services department here at VINS received a call from Vermont Game Warden Jason Batchelder. He had confiscated a juvenile crow who had been raised in a couple’s apartment after receiving a call from the couple’s landlord. This is illegal. In fact, it is considered a criminal offense to raise wilds bird in your home in the state of Vermont, and in all other states, as dictated by the Migratory Bird Act. Wild birds raised in people’s homes by those who do not have the proper training or licensure are almost always unhealthy, malnourished birds. Birds that come into our rehabilitation department after even just a week of improper human care come in suffering from a possible mix of malnutrition, severe feather damage, parasites, bone deformities and other injuries and illnesses. 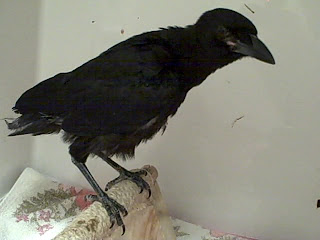 Note the damage to the crow’s tail feathers in the above photo, and her overall shaggy appearance.

The crow Sgt. Batchelder brought in had been in the couple’s apartment since the week of May 24. The bird came in reeking of cigarette smoke, and with incredible feather damage. It is unclear if the couple tried to clip the bird’s feathers to prevent her* from flying away, or if the feathers broke when the crow perhaps thrashed about in a cage. Her growth appears to be stunted, as she is small for her age. This is likely due to the very inappropriate diet the bird was fed, which included milk. As birds are not mammals, they do not drink milk. Birds do not nurse from their mother: their mother brings food to their nest and feeds them via her beak. White feathers on the crow also indicate malnutrition.

The game warden has pressed charges against the couple, which may result in a fine and a loss of hunting, fishing and trapping permits for one year.

But the biggest loss is for this young crow, who did not have the chance to grow up in her natural environment, where she could have learned best from her parents. We have high hopes for this bird, however, as we’ve taken in human-raised birds in the past (including a raven), and successfully released them to the wild. We’ll just have to be sure we can “wild” her up, and perhaps pair her up with another crow or two so she can figure out that she is a crow herself. Read about a similar situation regarding a raven who was habituated to humans, but was successfully rehabilitated at VINS and returned to the wild.

As for now, we are feeding the crow a balanced diet, and are pleased to see her putting on weight. We eagerly await the proper regrowth of her beautiful, black feathers.

* You may notice some blog entries have a specific gender associated with the bird being profiled. While in some cases you can tell visually what sex the bird is, in many cases you cannot: only a blood test can truly confirm whether some birds are male or female. Crows are such birds. I, however, prefer to call animals he or she rather than “it” – so I ocassionally “assign” a gender to them if the bird’s sex is not clear.

5 Comments
BACK TO NATURE BLOG