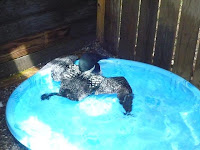 There are few bird songs as haunting and distinctive as the melancholy call of the common loon. Their song evokes an ethereal wildness unrivaled by any other waterfowl.

On May 10, VINS Wildlife Services received a call from a Brandon, VT resident who found a common loon in his front lawn. Loons’ legs are built for propelling themselves through and under water, and are unique in that they allow the bird to take off into flight from water. However, this special design prevents loons from being able to take flight from land — they must be in water to take off.

This particular loon is believed to have been blown off course while in flight during a windy storm in Vermont. The loon became “grounded,” meaning he landed on the ground and not on water, and therefore found himself unable to take off. 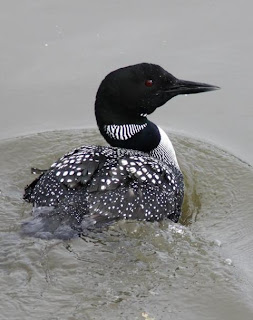 We took the loon in to check for any broken bones or internal injuries, but found that besides a few tattered feathers and slight dehydration, the loon was fine. After giving the loon a bit of time in a kiddie pool to recuperate and hydrate himself, we were able to release him later that same day. Click here to see a video of the loon’s release, and hear the bird’s amazing call.

If you should see a loon that has become grounded, 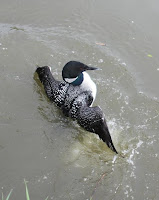 call your local wildlife rehabilitator and seek advice. The loon may have been injured and might need medical attention. It is not uncommon for loons to crash-land into parking lots. Loons, who fly at night, may mistake a wet parking lot for a lake and try to land on it as if it were water. In such cases, the loons often scrape their chests against the pavement and need their wounds to be treated.

Loon photos by Brian Bowen. Top right, the loon in a kiddie pool during its recuperation at VINS Wildlife Services. Center left, the loon splashes into the Connecticut River. Bottom right, the loon flaps his wings before swimming away.