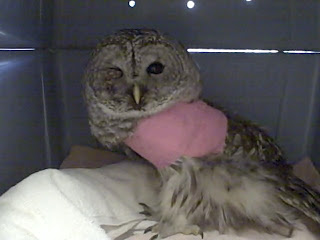 We’re getting our second wave of emaciated, hit-by-car barred owls admitted as patients at the VINS’ Wildlife Services department.

In the photo to the right is a barred owl who sustained a fracture in his left wing (and has a wing wrap on to stabilize the bone), as well as damage to his right eye. The owl pictured below came in with major head trauma, and was bleeding from his mouth.

Deep snow layered with ice is making hunting for rodents very difficult for owls and other raptors. Rodents often scurry to and fro beneath the snow, which acts as a protective barrier against predators. With the snow so deep and icy, raptors have a tough time punching through that snow with their feet to get to their furry meals below. 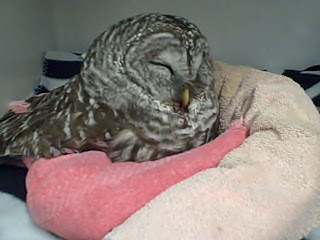 In these hard times, you’ll see barred owls and other birds of prey hanging out closer to your home and by the highway — both sources of food. Bird feeders at your home attract rodents, which attract the owls. And discarded food and trash along the highway attracts rodents and again the owls. With starvation setting in for many of these down-and-out birds, you’ll find raptors and scavengers (crows and ravens) being a little more bold. They’re less likely to fly away when you approach if they’ve found a source of food. Giving up their meal may mean giving up their chance at life.

The owls pictured in this blog represent just two of the 10 barred owls we’ve gotten into our care in the past 7 days! Unfortunately, we had to make the decision to euthanize the owl with internal bleeding. After three days he showed no signs of improvement, and his symptoms indicated his organs were shutting down. The owl with the fracture, however, is steadily improving. His eye has cleared up and in a few days we’ll be removing his wing wrap to check on the wing’s healing.