An Eagle Against the Odds

Here’s a remarkable story about a Bald Eagle on its last breath who, against all odds, was able to be nursed back to health and rejoin the wild:

On February 20th, the Vermont Institute of Natural Sciences (VINS) Center for Wild Bird Rehabilitation received a call about a Bald Eagle found lying face down in a slurry of ice on a snowmobile trail in Brattleboro, Vermont. The concerned caller had stumbled upon an eagle surrounded by piles of its last meal, which were regurgitated all around its face. Initially believing it to be deceased, the caller was awestruck after seeing the eagle take a small breathe. The local game wardens carefully brought the eagle to VINS’ rehabilitation center, where it was put into the ICU and given an enclosure with a heating pad to try and warm it up. Throughout the day, the eagle continued to regurgitate food, indicating it may have ingested something poisonous or toxic. The treatment plan for the eagle was to administer IV fluids in an effort to flush out whatever harmful substances were in its body.

Upon entering the exam room, the staff noticed that the eagle was banded with the United States Geological Society (USGS). After looking up the band information, the eagle was determined to be a female from Canada banded by biologist Dr. Guy Fitzgerald on November 21st, 2013, the year it was hatched. This remarkable information came as a great surprise to many of the staff in the rehab department, because often times it is impossible to tell the sex of an adult bird, let alone know the year it was born or where it originally came from. Upon ICU intake, she was too weak to stand and could only lie face down in her enclosure with her eyes closed. She continued to regurgitate her last meal while rehab staff looked on unable to aid her any further – all desperately hoping that she’d make it through the night. When the staff arrived the next morning, they immediately checked on her and discovered she was no longer lying face down on the ground, but standing up on her own power. Although she still lacked the strength to perch, her small triumph was a glimmer of hope for everyone that had seen her in her previous state. She continued receiving IV fluids and soon after began a liquid supplemental diet in addition to the fluids.

Over the next few weeks she slowly gained the strength and energy to begin perching a few feet off of the ground in her ICU enclosure. She was also transitioned off of her liquid diet to one of solid food. This meant being force fed rat and fish as opposed to the liquid feeding tube she had previously received her nutrients from. The force feeding soon turned into hand feeding and she eventually was able to move out of the ICU and into an outdoor enclosure where she quickly began to eat on her own. After continuing to do well in her outdoor enclosure, she was finally moved to our largest enclosure, the flight cage, in which she had space to fly back and forth for longer flights and perch high up in the air. Once she completed flight physical therapy, which involved encouraging her to fly and bank around corners, she eventually regained the muscle strength she would need to be released back out into the wild. 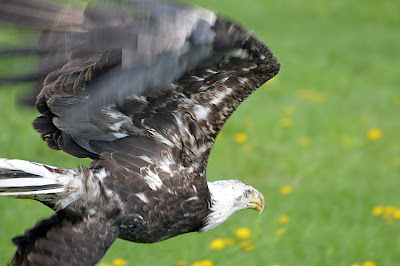 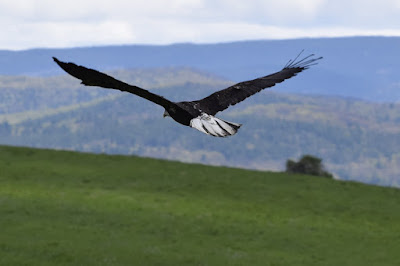 On May 10th, the eagle was released back into the wild in Windsor, VT where she took flight and eventually caught a great thermal pocket of air that gave her plenty of lift and she continued to ascend high into the sky. She was even greeted by a wild Bald Eagle that soon joined her and flew beside her! 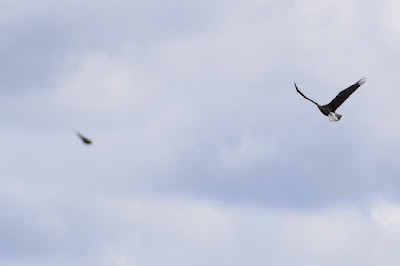 Her rehab story is remarkable, not only because VINS doesn’t often get calls about Bald Eagles needing medical attention, but also because she was banded which provided us with a wealth of information on her. When reaching out to bander, Dr. Guy Fitzgerald, to let him know about her story and her release, he explained that back in 2013 the eagle had been found in a slurry pit after having inhaled a lot of fumes. Concerned for her safety and well being, she had x-rays and an endoscopy exam which confirmed that she was indeed a female. After clearing her of any overall health issues or internal damage to her respiratory system she was returned back to the wild by a volunteer and over the years must have made her way down to Vermont. We can now proudly and successfully say that she is back out in the wild where she belongs – thanks to the help of all staff, supporters, and volunteers who made her recovery possible.