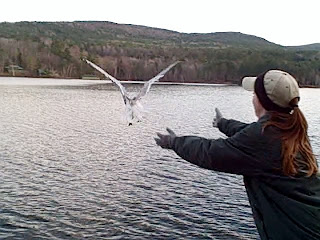 It’s not all forest-loving birds sporting talons and sharp beaks here: sometimes patients come to VINS fresh from the shore on webbed feet.

In late September, the Wildlife Services department welcomed a ring-billed gull into its care. The bird was found sitting in the middle of the road in St. Albans, VT.

In the photo, VINS Wildlife Keeper Sara Eisenhauer releases a ring-billed gull back into the wild. Watch a video of the release!

The bird came in to VINS thin, with mild head trauma, a broken blood feather, and a slight limp. While we can’t say for sure what happened, we suspect he may have been struck by a car, given his grounding on the road.

After plumping the bird up and treating him for suspected nerve damage in his left leg, the gull spent some time in our outdoor flight cage where we could see this white-winged wonder do his thing. Here at VINS we’re accustomed to seeing large raptors fly with muscled power back and forth in the flight cage, perch-to-perch. The gull, however, offered a nice change of scenery — gracefully flapping his thin wings, hovering above us as he rode the wind and casually flew around, yellow legs dangling down.