In the winter, Canada geese leave Vermont for warmer climes where open waters abound. When flocks gather and head south, it’s the injured geese who are left behind. The VINS Wildlife Services department receives many calls in the winter about geese who are by themselves, trudging through snow to find water that hasn’t iced over. Many come to us with a severe, old injury, such as a broken wing that never healed. These birds are often emaciated as well, as they have not been able to find food on snow-covered grounds or iced-over lakes. 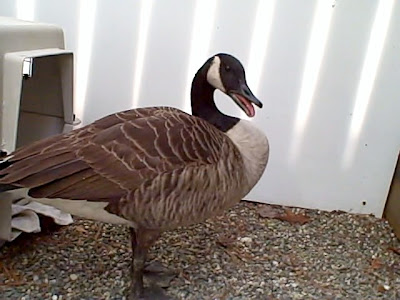 So we were a bit puzzled when a Canada goose — found wandering alone in a busy shopping center parking lot — was brought in December 17 and showed no fractures, no wounds and no sign of emaciation. Why was this goose, pictured above, walking in a heavily trafficked area? Why hadn’t she flown south like the others?

In the final part of the goose’s exam, Wildlife Services Director Allison Stark stretched out both of the bird’s wings to see if there was any disparity between the wings that might reveal a problem. Although she hadn’t felt a fracture when she felt each wing separately, she thought comparing the two might reveal something. And reveal it did.

The primary feathers on the goose’s right wing were inches shorter than they should be, with perfectly straight edges, instead of the normal rounded tip of a bird’s feather. Without a doubt, a person had cut this bird’s primary feathers in an effort to prevent the bird from flying away. People sometimes do this when they have a pair of wild geese visiting their pond, and want to keep the geese on their pond — almost like pets. Cutting a bird’s primary feathers prevents it from flying. This is not only illegal, it is cruel and poorly thought out, as the goose needs to fly south once the waters freeze over.

The goose is now in our care, being fed a mixture of cracked corn, pellets and lettuce. We will have to keep the goose in our care until she molts and regrows her flight feathers, which may mean keeping her to spring. It is unfortunate this goose is denied her natural, wild existence, but we will take the best care of her until she is able to return to her home in the wild.