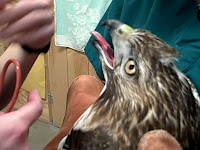 Like wolves, red-tailed hawks seem to have a spirit that’s both majestic and dignified, symbolizing their status of royalty in the wild. Their large size, powerful flap and graceful soar make them a delight to spot for birders and non-birders alike.

In early February, the VINS Wildlife Services team received a call about a red-tailed hawk sitting in a field. The hawk, when approached by a passer-by, tried to walk away, but could not fly. The bird was brought into our care for a close evaluation.

While we could see one of the hawk’s wings was drooping a bit, there were no broken bones or wounds to indicate a specific problem. As a healthy wing would not droop or hang limp, we suspected possible nerve damage and prescribed a homeopathic to treat it. 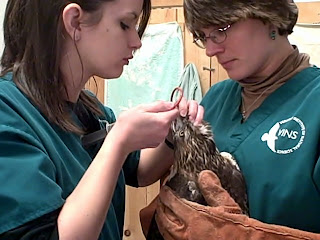 Above, VINS staff Audrey Gossett (left) and Noella Girard administer fluids orally to a red-tailed hawk.
Watch a video of this hawk being treated here.

In three days’ time, the bird’s prognosis was clear. It was nerve damage, and unfortunately it was more severe than we knew and beyond our help. We knew the nerve destruction was quite severe as the dear bird began to chew on her own wing with her beak. Often when animals lose sensation of a limb — due to an injury such as nerve damage — they try to get rid of the limb as it is useless and dragging it a hindrance. As soon as we saw this happening, we knew we needed to end the bird’s suffering and chose to humanely euthanize the hawk. Not every bird we see can return to full health, but we take heart in knowing that we ended what could have been a long period of suffering for this red-tailed hawk had it remained without help in the wild.